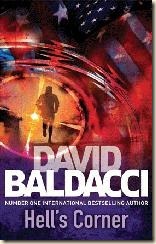 An attack on the heart of power . . . In sight of the White House . . . At a place known as . . . HELL’S CORNER Oliver Stone – once the country’s most skilled assassin – stands in front of the White House, perhaps for the last time. The president has personally requested that Stone serve his country again on a high-risk, covert mission. Though he’s fought for decades to leave his past career behind, Stone has no choice but to say yes. But Stone’s mission changes drastically before it even begins. It’s the night of a state dinner honouring the British prime minister. As he watches the prime minister’s motorcade leave the White House, a bomb is detonated in an apparent terrorist attack against both leaders. It’s in the chaotic aftermath that Stone takes on a new, more urgent assignment: find those responsible for the bombing. Stone’s opponents are elusive, capable, and increasingly lethal. Worst of all, it seems that the park bombing may just have been the opening salvo in their plan. With nowhere else to turn, Stone enlists the help of the only people he knows he can trust: the Camel Club. Yet that may be a big mistake. In the shadowy worlds of politics and intelligence, there is no one you can really trust. And Hell’s Corner truly lives up to its name. This may be Oliver Stone’s and the Camel Club’s last stand.

I read the paperback version of this book. It is 600+ pages and I wish I’d read it on my Kindle it would have been easier to handle!

This is the fifth Camel Club book, a group of misfits and loners who have come together throughout the series. The interaction between the characters is always very entertaining, though the main protagonist, Oliver Stone, takes centre stage once again. Stone is a man with a triple six killer past and a knack for getting the best out of his friends. The establishment hate him and the conflict is central to this series of books.

I don’t think this is the best Camel Club book (I’ve read all but the first one), but highly recommend the series. The only niggle I have with his books is the number of adverbs after dialogue. Going through writing courses I’ve been told to show not tell and here we have a lot of telling. I find myself counting the number on the page sometimes.

But that doesn’t spoil the books for me. Later this year I will read the first book in the series once my hands have recovered from holding Hell’s Corner! 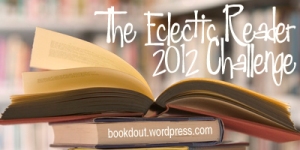 This is the second book I have read for the Eclectic Reading Challenge 2012. This is the book for the Thriller /Suspense category.

I'm a writer working my way through the redrafts of a British crime novel. I also write short stories, flash fiction and some screen writing. Check out my blog for more.
View all posts by Pete Denton →
This entry was posted in Reading, Recommended Books and tagged Camel Club, David Baldacci, Hell's Corner, Oliver Stone, Reading, Thriller, Writing. Bookmark the permalink.